It is my final morning and I get up early, to catch the sun before it rises. The morning is alive with the cries of gulls and, near me, the ch ch ch of wrens. Out at sea, between the island and the horizon, a fishing boat still has its lights on. The breeze on my face rustles the leaves of the small tree overhead, while the sea hushes and sighs. It is a beauty as hard to capture by camera as it is in words.

The horizon line is a deep, dark blue. It might have been drawn there, earlier this morning, by someone who wished there to be no confusion about just where the sea ends and the sky begins. The sea is calm. The sky is wildly improbable – so many colours and shapes and shades and textures. Between the clouds, a sliver of peachy-pink light.

Geese are honking. Boats with lobster pots pass the island from north and south, bright moving lights below the horizon. I wonder how early the fishermen rise. I breathe in the calm, the coolness, the quiet. Perhaps there is no peace quite like this. 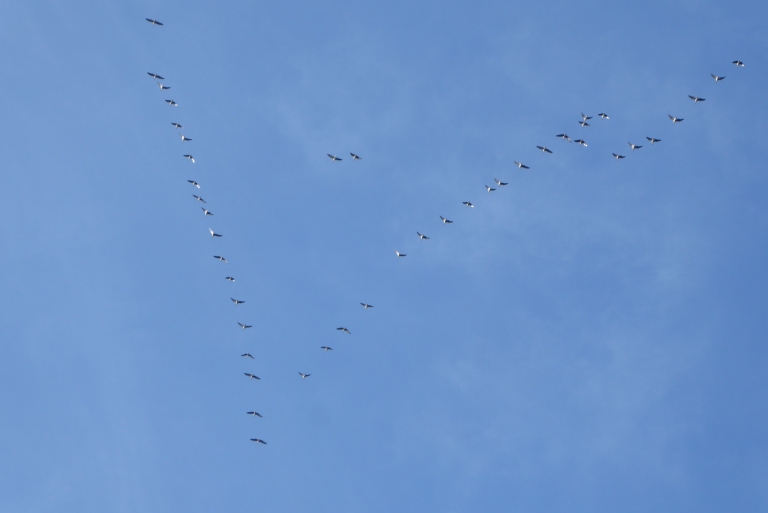 This thought is broken by a sharp scolding sound from about a foot above and to the left of my head. A wren is surveying me suspiciously – this giant sitting by the wall. Looking again, I see there are two of them, tiny and stouthearted. They have pale stripes beside their eyes. The day before, on the radio, W and I had heard Robert McFarlane read his spell for a wren, and I recall it now, as they chatter and flit around me. It could only be magic.

The sun is rising behind the clouds, colouring them in blues and greys and pale pinks. There are some like ships, some like feathered wings, stripes, wisps, and candyfloss towers. I am alone with the sky, the sea and the birds, for the last time.

A cry from W at the window – ‘Ceris! Dolphins at the harbour mouth’ – a hastily lowered pair of binoculars, and a moment and an age watching their dorsal fins break the surface of the water as the sun sets.

Playing pétanque in the courtyard with the Coquet volunteers and discovering that I am really, really bad at pétanque. Worse than I thought the laws of chance would allow. Game-changingly bad, as I loose the boules and send the tiny orange ball scurrying for cover.

Learning that the Latin name puffinus puffinus belongs to the Manx Shearwater, and searching for logic where none exists. The puffin’s Latin name is fratercula arctica. Why??

Not washing my hair for a week, nor removing my hat. It has reached the point where I no longer dare to.

Watching the film The Island and (spoilers) discovering there is no island in it. The television room was once part of the old monastery. Now it is the site of theories about clones.

Listening to music in the kitchen while cooking. W, with mirth in his eyes and the lines around them, bowing to my tastes and choosing cheesy pop from the 80s to early 2000s.

Mowing – in long meandering lines or in circles around small nesting plots. The machine has its own pace, which I adopt, and steer idly, my thoughts on other things. Occasionally a rock beneath the surface of the grass is caught in a grinding, grunging, shocking moment – but after an affronted splutter, the mower resumes its work.

Picnicking with the Coquet volunteers after dismantling the hide – cheese, bread, fizzy wine, pâté, home made apple and cinnamon muffins. A humorous, welcoming and fascinating bunch. Before even leaving, I am pulled back.

And an ending. A farewell to this tiny island, this glimmer, this haven for seabirds, this place of sunrises and sunsets and strong winds. ‘Good to know you,’ says P, as we say goodbye at the railway station. ‘You too,’ I say, amongst my inadequate thank yous. It has been such a week – impossible to do justice in words, though I try to.

The train approaches and I hoist my bags, embark – hoping I don’t smell too bad and that nobody need endure sitting beside me. I am lucky. I sit alone, beside the window, and begin the journey homeward.

If you’ve made it this far, thank you, and enjoy W’s amazing video of a Sandwich tern waltz.

2 thoughts on “A week on Coquet island: farewell”

This is a text widget. The Text Widget allows you to add text or HTML to your sidebar. You can use a text widget to display text, links, images, HTML, or a combination of these. Edit them in the Widget section of the Customizer.
Loading Comments...
%d bloggers like this: