The fret is beginning to clear. It has lingered for the past 24 hours, a soft grey shroud, ebbing and flowing like the tide. Last night it crept from sea to land, entering the courtyard quietly as we gathered in the kitchen for bird log and tea. We looked out through the great glass windows and marvelled at its progress, saw the two wardens off at the door. Shoes laced, goodnights wished, they disappeared quickly from view.

It was still there this morning, enveloping the island in a quiet stillness. I woke late, after an interrupted night – at twenty to nine exclaimed in horror at the loss of the day, threw on yesterday’s clothes and set off into the misty morning to see what could be seen.

Swallows soared past my head – they are here for the season now, flitting in and out of the compost loos and the visitor centre to inspect what remains of last year’s nests. I saw my first on 4th April, sped along the length of the garden to watch it from the rise. In my notebook it is written in capitals – ‘SWALLOW!’ – a promise of summer on its way.

I set off for the ponds – Green and North – hoping for good views of the resident warblers and ducks and, perhaps, for a glimpse of a migrant – deterred from further flight by the fog. Neighbouring island Skokholm have had cuckoo and reed warbler – on the mainland at Marloes, a turtle dove – so perhaps?

I’ve never seen a turtle dove. I know them from the song – five gold rings! – and from the IUCN red list (vulnerable, population decreasing). I was not to see one today. But at North Pond, I watched four sand martins and three long-streamered swallows, skimming the water with effortless and astounding grace. Sedge warblers – at least three – sang their loud, scattergun refrains, perching on reeds or twigs. The male ducks – shoveler, mallard and shelduck – idled at the water’s edge. In the reeds, perhaps broods of ducklings shelter – but the edge of a gull colony is a dangerous place for so delicious a morsel.

A return to the farm, and coffee, and lunch. And here I sit, writing for the first time since arrival – wondering how to marshal my thoughts, what to put down, what to leave out.

Every now and then, the sun breaks through the low cloud, lights up the courtyard at the farm. The last pale heads of daffodils catch the light. The grass is cropped short and peppered with rabbit droppings, the culprits chew comfortably beneath the picnic bench. A pair of pied wagtails circle, the one bowing, wings outstretched, the other with its tail high and quivering. It is a mating dance, and wonderful to watch.

The pied wagtails have been here since the day of my arrival – 6th March 2020. Assistant Warden on Skomer – it was a thrilling, terrifying, overwhelming thought. 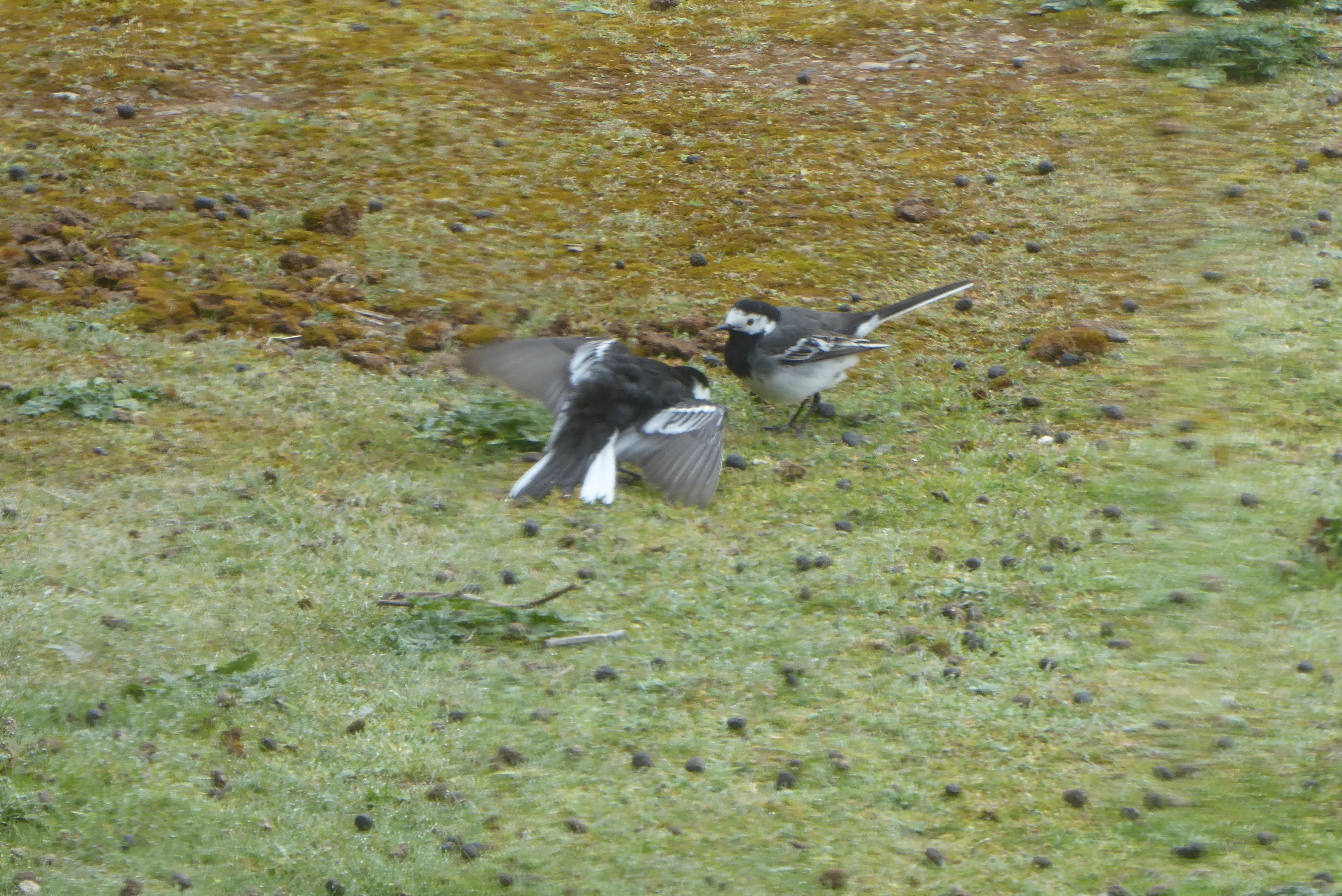 It is not so very long since office life in Edinburgh, since SEO meant search engine optimisation and not short-eared owl. Three years since I left the city, the great gamble – possible only through the privilege of having family with whom I could stay, and savings which I would now begin to spend. After three years of volunteering and apprenticeship, of working and learning and wondering a million times what on earth I was doing – after three years, a ‘proper job’ in conservation.

The call came on the Sunday evening – a poor connection – ‘We’d like to offer you the job – are you still interested?’. I’d assumed I hadn’t got it – that ‘end of the week’ had come and gone. I’d been quietly reminding myself of the reasons why moving to Wales wouldn’t have been practical, or sensible – far too far away, and didn’t I want to be in Scotland long term anyway? – and that it was all, therefore, for the best.

In a rising swell of disbelief, I double-checked I’d heard correctly – spluttered, ‘yes, yes please’ – heard only the dial tone in response. I scurried to my room in search of signal, returned the call. I managed somehow, through my jumble of feelings and words, to express my acceptance. Then sat on my bed, looking out of the window at the scudding clouds.

It was the 2nd February. I would start on the 27th.

The next three weeks were a blur of packing and farewells – an Edinburgh rendezvous with friends Victoria and Alex and my ‘almost-godson’; a trip to Anstruther for fish and chips and beach walks with my little sister ‘we’ll just say see you later– I’ll be visiting in April’. A ceilidh with my dearest friend Annie – cold at first, in the great chilly hall, then strewing layers on a chair, dancing every dance, laughing and whirling. 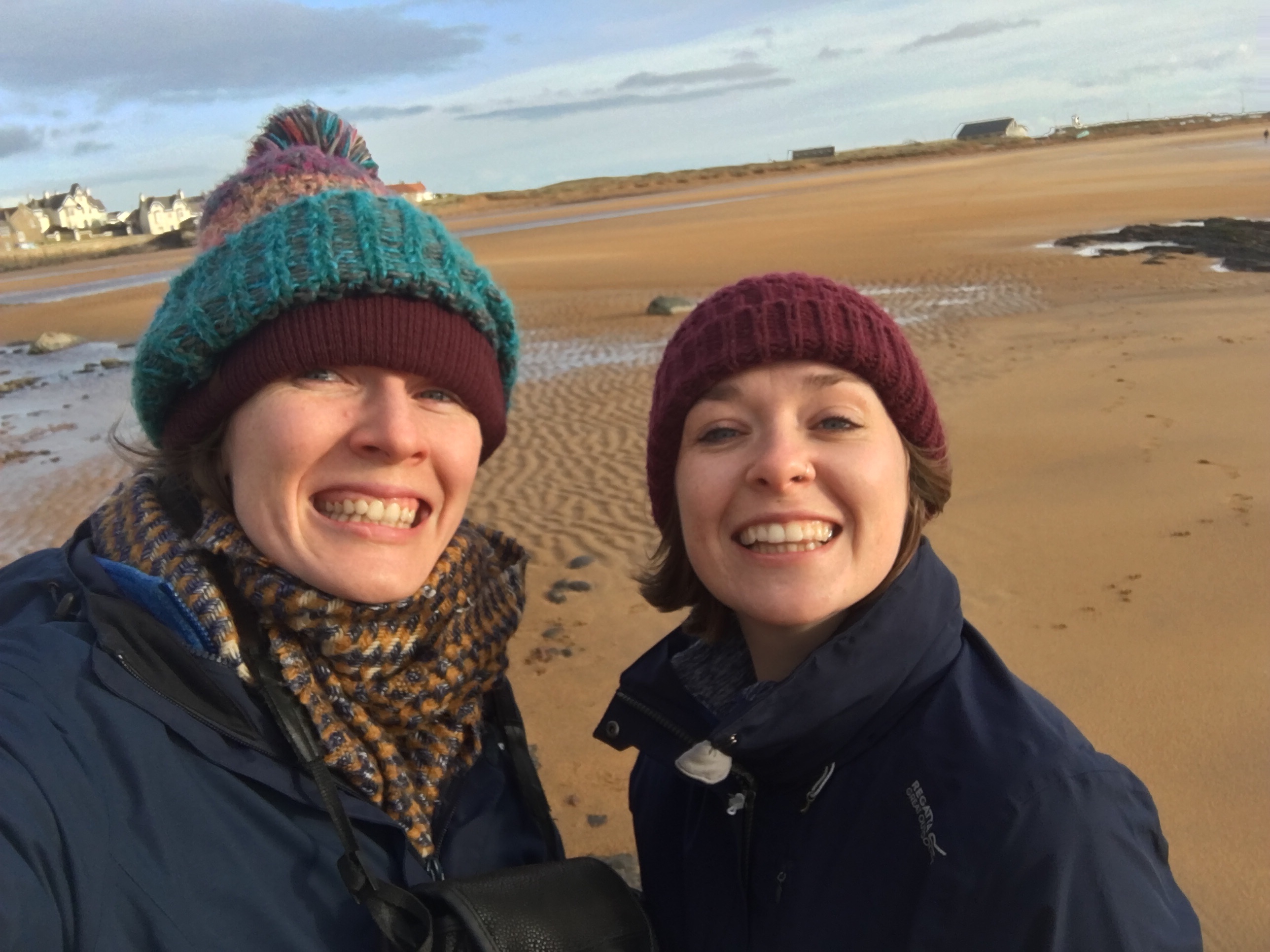 I made the most of walks with Mum and the dog, enjoyed the everyday routine of dinner then crossword and tea and just a square or two of chocolate. In Eyemouth, a last pub quiz and pizza – advice from seasoned island-goers on what to take with me.

They wished me luck, with a trace of longing in their voices. In the breeding season, Skomer has half the world population of Manx shearwaters… I’d never seen one but – ‘Smell a Manxie for me?’ – I promised I would.

I’ve always hated packing. I can imagine too many scenarios, but not necessarily the right ones. Will had sent me a packing list he’d used before – I clung gratefully to it as a beginning, smiled at the thought of his adventures. Made my own lists, colour-coded, so I’d know what was in which bag. Emptied and repacked, swithered for hours – one hot water bottle or two? Mum gave me a dry bag from her sailing days – I’d been warned the crossing might be a wet one.

I filled the car with rucksacks – guitar – ukulele. Three plastic bags of books, neatly labelled ‘Library 1’, ‘Library 2’, ‘Library 3’. I could use my boot as storage for things not needed immediately – we’d travel across for groceries every few weeks once the visitor boats were running.

This, of course, has not exactly come to pass.

I’d heard of coronavirus – a flu-like virus hitting China hard, with the beginnings of cases in Europe. I didn’t know much more. There was a cough, and a fever with it – much like flu – very infectious. Mind wrapped up in my adventure to Wales, I didn’t think much more of it at the time.

I checked washer liquid, oil levels, tyre pressures, patted the car on the bonnet – we’ve some adventure ahead, Bam Bam. Hugged Mum and Alistair farewell – stroked the dog – gave Mum a final squeeze, both tearful. ‘I’ll be back before you know it – I expect to see that wall pointed.’

Started Bam Bam up – she’s a rickety old beast. I thought then that I should have bought some breakdown cover for the journey down. Too late now! – and off I went, waving until out of sight of those two diminishing figures in the lane. I was on my way.

And sitting here now, I’m not sure if this is what I wanted to write, exactly – or what I should have written, quite – but it is a relief to have begun.

This is a text widget. The Text Widget allows you to add text or HTML to your sidebar. You can use a text widget to display text, links, images, HTML, or a combination of these. Edit them in the Widget section of the Customizer.
%d bloggers like this: